Supporters:Ministry of Education Culture and Sport of Ajara and Telavi Municipality Administration Publishing

Project will take place in Telavi, Batumi and Tbilisi. 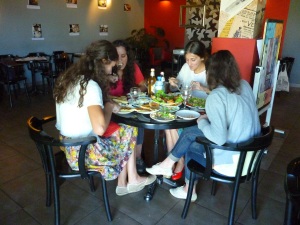 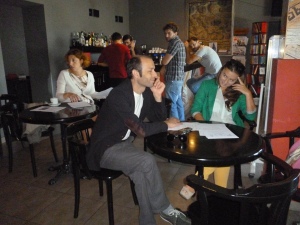 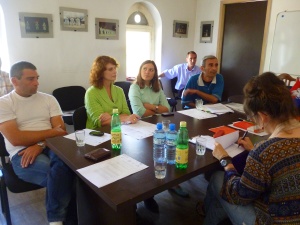 Up to a week in Telavi and Batumi the project partners will hold a seminar, identifying the issues of cultural organizations and main tendencies. As a conclusion evaluation meting and later public presentation will be hold in the Goethe Institute in Tbilisi.

The project aims to establish the Curatorial platform, to create an ideas and support artistic and curatorial collaboration, therefore to increase the quality and number of exchange projects between two countries, to increase the professional level. Project envisages identifying what are the professional curators now-days in Georgia and other countries. What is his/her role and responsibilities as representative of cultural organizations or as an individual curator, what is possible to gain from international cooperation and how to us the local context.

TASWIR in Arabic, Persian, Ottoman-Turkish, Hindi, and Urdu means “image making”, “picturing”, “representation.” The pictorial atlas TASWIR is based upon the Berlin exhibition TASWIR 2009 / 2010 and is currently developed into an encyclopedic, fractal image portal.

The TASWIR project in Berlin 2009/2010 developed an exhibition parcours of visual, literary, and acoustic artistic positions presenting over fifty contemporary artists’ positions from East and West together with objects of classical Islamic, Persian, Ottoman art. Within the inner atrium of the exhibition, the curators developed a site-specific artistic and intellectual engagement of the various exhibition artefacts within a special public setting, a performative kind of “madrasa”, offering new layers of the exhibition in which international curators, artists and intellectuals offered interpretations, commentary and new works of art (an exhibition within the exhibition).  Within this performative setting, the digital TASWIR ATLAS was created to witness this interpretive process; in the website TASWIR.ORG the various artistic materials produced were ‘deposited’, recorded, edited and archived during the exhibition itself.

WWW.TASWIR.ORG has in the meantime become itself a digital palimpsest, an ephemeral and dynamic organisation of knowledge that overwrites its own history with continuously updated configurations.  The project engages classical exhibits and topics from pre-colonial traditions as constituents of a post-colonial cultural agenda, playfully relocating the axis of European Modernity, which in the renowned Aby Warburg’s Mnemosyne Atlas was generally seen as an extension of the European Renaissance and of classical antiquity.

Shulamit Bruckstein Çoruh, initiator and founder of the TASWIR project, together with Lotte Fasshauer, TASWIR artistic coordinator and co-curator, present and visualize the TASWIR project in the seminar and are looking forward to discuss future ramifications, congenial ideas and projects, overlapping methods and possibly even joined future venues with the participants.

TRAM (Transform Art Module) Foundation – a Georgian, non-governmental, non-profit organization, which has several years of experience in the field of contemporary art as an informal group uniting an ever expanding number of artists and organizing cultural events utilizing innovative ideas, platforms and venues.  TRAM is interested in expanding borders of existing art spaces (museums, galleries, theaters, etc) by trying to utilize other social spaces as well as outdoor spaces as much as possible. Through art TRAM tries to focus attention of the public on the pressing issues of society and art in wide variety of spheres. TRAM organizes and participates in different local and international artistic projects, based on the collaboration initiative.  TRAM envisages high civil involvement in the projects, through involving the local public during the project implementation, in different places.  TRAM makes each project as a new stop, with an aim to create a new basis, a new platform for future development.

Ana Riaboshenko an artist and curator, since 2010 till 2012 she was Regional Coordinator in Georgia of Arts& Culture Network program. Since 2007-2009 she worked as a mentor of Arts& Culture Network program.  Ana Riaboshenko is a president of TRAM foundation since April 2007. Marta Tabukashvili – designer and initiator, since 2007 is a board member of TRAM.